Ruth Jacobs grabs the mic today to share her story and the stories of women she has known. 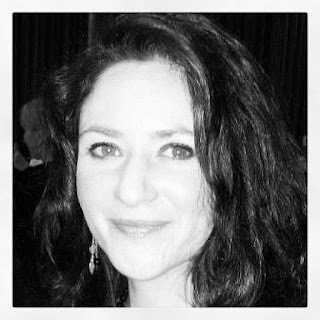 In Her Own Words... Interview with a London Call Girl was a video interview I transcribed as part of my dissertation on prostitution in the late 1990s. There were two reasons I chose prostitution as the subject of my dissertation. The first is that I had already undertaken a study in criminology, examining female criminal and deviant behaviour from a sociological perspective. The second reason was that I had a couple of friends who worked as call girls. Being aware of the importance of firsthand accounts as opposed to academic research when undertaking a study such as this, the latter is probably what cemented my decision.

From my teens through to my mid-twenties, I was somewhat wayward and spent time in London’s underworld. That is how I was introduced to Q - the woman whose video interview I fully transcribed for the book, In Her Own Words... Interview with a London Call Girl. When I first met her, I thought she was a model. She was stunning, and as I grew to know her, I realised she was just as beautiful a person inside as well. She is no longer alive, which is why all the royalties from the publication are being donated to Beyond the Streets, a charity that helps women exit prostitution. Research shows that nine out of ten women would like to exit if they could.

In addition to Q, I also knew a few other women who worked as call girls in London and approached them to ask if they’d be willing to be video interviewed for my study. Two others agreed, who I refer to as R and S. I had a great deal in common with these women and most other women who work as prostitutes. I suffered sexual assaults as a child, I had been raped, and I had post-traumatic stress disorder. I also had issues with drug addiction. 75% of women in prostitution have been sexually and physically abused as children, 70% have experienced multiple rapes, 67% meet the criteria for post-traumatic stress disorder, and 95% have issues with problematic drug use.

At the time, I was unaware of the denial most of the women would be in. They presented as what you might call ‘happy hookers’ but inside they were not happy. Most had suffered childhood abuse and continued to suffer abuse by clients to varying degrees. Although I knew this from conversations with them, for the interviews I thought it best to allow them to take the lead and discuss what they felt comfortable with. Not surprisingly, they did not want to discuss those issues, with the exception of Q. It was clear that R and S were putting on as much of a front as they could, and in hindsight, I can totally understand why. Having since spoken with a number of exited women it is evident that the pain and trauma from prostitution is often not felt until after exiting. Before then, like XLondonCallGirl says, you live in denial, and like Q said in her interview, you live in a fantasyland. That is the protection/coping mechanism that enables the women to carry on with a veneer of toughness, the appearance of being a ‘happy hooker’, and without falling apart.

S used to smoke crack with her clients in a room in her flat while her baby was asleep in the other room. She ended up losing custody of her child. Q was raped both as a streetwalker when she was originally forced into prostitution at the age of fifteen by a pimp, and the clients who had sex with her at that time were paedophiles raping a child. She was also raped while working as a call girl too. I also recall another instance where she was extremely badly beaten by a client. In addition to that, she was once robbed at gunpoint in her flat. This life of a ‘happy hooker’ is not the reality of being a call girl. All three of the women I interviewed were on crack and cocaine.

One of my aims is to dispel the ‘happy hooker’ myth. I want to show vulnerable, young women, who are the women most likely to enter prostitution, that being a call girl is not a glamorous occupation as the media has been portraying it to be. Of course, on the outside it is glamorous, but on the inside it is not. It can take years to recover from, and I am sure many never fully recover, certainly from the women that I know.

Another part of what I hope to achieve is to change the stigma much of society has against women who work in prostitution. They are often judged and looked down upon. These women have mostly had painful and tormented childhoods and tumultuous present lives. They deserve to be seen and respected as any and all other women should be.

I am hoping with my series of novels, Soul Destruction, the first of which will be published by Caffeine Nights in 2013, and also with my charity publication, to go some way to achieving these goals. 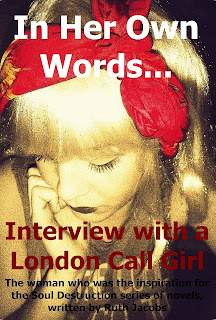 To learn more about Ruth Jacobs and the Soul Destruction series of novels visit her website at www.soul-destruction.com


Ruth Jacobs studied prostitution in the late 1990s, which sparked her interest in the subject. Her series of Soul Destruction novels dispel the 'happy hooker' myth and expose the dark world and the harsh reality of life as a call girl. She draws on her research and the women she interviewed for inspiration. She also has firsthand experience of some of the topics she writes about, such as post-traumatic stress disorder and drug and alcohol addiction.
Posted by JD Mader at 4:51 PM