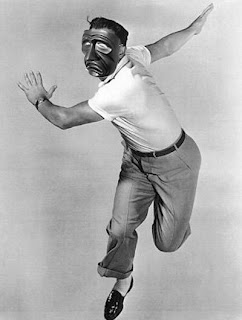 I have the unique privilege of actually knowing the brilliance that is Nastyface in person.  I have dined with him.  I have spoken with him at length.  Which is why I will never, even under duress, reveal his identity.  He is featured here because he is talented.  And I wanted to pick his brain a little.  So, many thanks for the interview, brother.  Your secret is safe with me.  (Until the threat of waterboarding - then I sell your ass out in a nanosecond).  For real, though...if you dig music, check this fool out.  And check out his crew.  I promise you will not be disappointed.  There are a lot of musicians doing the same old shit the same old way.  Finding someone who is unique can be a challenge.  I did the dirty work.  There are enough links on here to keep you in fresh beats for days.

My true self isn't human form. Therefore, I would be misrepresenting myself to use my host body's face.  It's temporary anyway. As far as the mask, it could be any mask. The one I use is thin plastic and cheap because it means nothing. I don't agree with how close the world sets their eyes and ears. It makes sense, but it's shallow.
What's your process for creating?
I always cut my beats from a marble slab. Sometimes I chip away for hours and sometimes the pieces just fall right off. I just let the final product reveal itself. I've never really been sure if my beats were already created somewhere in time or if they were created in my mind. As much as my physical body is a conduit for my mind, my mind may just be a conduit for the creativity.
How does technology factor into your work?  Obviously, it makes things easier...but is there a cost?
I strive to be innovative at all times and that means constantly embracing new tech. I'm a big believer in the idea that the ends justify the means when it comes to art. My heaven is a room full of MPC's and computers. Wires everywhere.
What/who is your inspiration?
I draw inspiration from artists who do their best work after their 40 hour work week and give it away.
Would you keep making music if no one could ever listen to it but you?
If I cared about other people listening to my stuff, I would have quit a long time ago. I've been doing it for 10 years and only a handful of people have really heard anything until the last year or so. There have been times when I contemplated moving on and using my time in other ways, but I always came back to samples and hip hop. At some point, I just figured out that it's what I would do in a vacuum. If my life were a blank slate.
What are your feelings about underground/indie vs. 'mainstream' music?
Money ruins everything.
How do you get your work out there...how do you make connections?
Doing a bunch of shitty things on the computer that I don't want to do. If I had it my way, I would be cutting beats all day and I would pay someone else to promote. But I do like sending my stuff to the artists I respect and collaborating with different people. As far as connections, there is no difference between all the relationships in my life. I make no friendships for money.
You know I dig your work...who are you listening to?
Beats: Exile, Samiyam, Juels, 9th. Rappers: Blu, Fashawn, Phonte, Johaz DagSav. Always: Elliot Smith. Stevie Wonder.
How important is music...to you, to the world?
Music is part of the world’s body. Like how important is your right arm? I'm not really a fan though, in general. I don't really have an allegiance to music over, say, film, or photography. It's all the same muscle like I said before. It's honesty. People who like shitty, dishonest music are usually shitty, dishonest people.
How great of an impact do world events have on music?
Our world creates the people in it and artists do their work so we all can understand it. It's all cause and effect. Sometimes Art can change the profile of the world too, I guess. But it's mostly a reflection. Eh, I don't know, I'm too sober to be any deeper than that.
What work are you most proud of?
Honestly, I'm just proud of the idea that I've been chosen to be an artist and that I create art on a daily basis. As much as it can be a burden, it's the only way, that I can see, to live forever.
When was music at its best?  Or is it always a mix of good and bad?  Was there a golden age?
It's best when it's moving in headphones on a bus as it is in a club with 100 people bobbing their heads to it. It's best when the creator likes it and everyone else can fuck off. When every tweak was made on a whim and the vision is unkempt. The golden age is always now.
Where does the line between a genre of music and the scene that accompanies it lie?
Interesting question. I don't get out much, so my scene is my room w/ my equipment. People all dressing the same and patting each other on the back makes me want to fucking kill myself if that's what you're asking.
How important is perfection to you when it comes to your music?
Not very. Perfection is for the people I'm working with.  I get bored of idea's easily. Always looking for that next sample.
What instrument do you wish you played?
Piano.
Do you ever plan on taking off the mask?
I don't plan on it; I've always felt it a conflict of interest. The day I don't, I'll leave it at home. It's a piece of shit mask anyways. Very uncomfortable. The eye holes aren't in the right spot.
Give some shout outs...
The LessIsMore Crew (Swell, Awdbawl, Lost Lane, El One, Ryan Calavano) and The Dirty Science Crew. And JD Mader, of course.
What question have I failed to ask that needs to be answered?
I don't know. I thought you did your job well.
Thank you.  I try.  Sometimes.  This time I tried.
Check out these links for more NF and some other talented folks you might not know about:
Nastyface
twitter:@nastyfaces

LessIsMore
Swell
The Dirty Science
Ryan Calavano, Director
Leave a comment for Nastyface or any of the other artists featured below.