It's all in the Paperwork by Richard Godwin 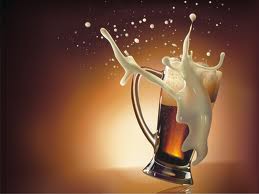 His charm wasn’t contagious. No vaccines were made against it. He didn’t even know what a Rorschach test was. Dolphins hated him and dreamed of eating him. He tried growing a beard but he looked like a twat. He’d been known to make people throw up just by walking into a room.

Josh Adams started out as a campus rapist. He tied two students to their beds and fucked them with a Dos Equis bottle. He stood in front of the mirror for hours imitating the Dos Equis ads, saying over and over ‘I am the most interesting man in the world’. He played the all-round good guy in front of his friends and flunked his geography course. Until he found his true career path, he’d only ever been interested in geography because he wanted to travel. He’d never left the States, in fact he’d never travelled out of Kansas. When he became a cop he didn’t even own a passport.

He made a lot of arrests and got on the good side of his corrupt, racist boss who ignored his misdemeanors and sloppy paperwork. He liked to strip search his female arrests.

One day he was called to the scene of a bank robbery. Two masked men had beaten up the manager. Josh had no interest in catching them and instead looked for records of any recent releases from jail.
He arrested Blake Thomson, one time thief and petty criminal who had gotten out of jail a few days before. Blake was shopping out of state when the robbery occurred.
‘It’s all in the paperwork’, Josh said.
Blake gave him the receipts to prove it. Josh buried them and Blake went back to jail.

Josh’s boss retired and he took over. His obsession with Dos Equis returned and he bought a fake beard and kept a supply of the beer at the back of the station. One night he arrested a tall blonde called Cindy. She’d thrown a glass at the barman in a nightclub. Josh walked into the cell wearing his beard and stuck his hand up her skirt.
‘I am the most interesting man in the world’, he said, and stopped suddenly.
He felt a dick.
‘What the fuck?’, he said.
‘I’m a boy’, Cindy said and started laughing.
Josh broke Cindy’s jaw then smashed himself in the face with the butt of his gun.
Cindy was sent to jail for assaulting a police officer. He ran into Blake there.
‘That fucking pig’s scared of trannies’, he said. ‘He thinks he’s that guy on the Dos Equis ads, dresses up like him.’
‘It’s good to meet you Cindy’, Blake said.

When Blake was released Josh was nearing retirement. He’d bought a stable where he kept a horse. He’d ride out on it wearing his beard, thinking of all the amazing things he’d done with his life. It was a beautiful summer morning when Blake caught up with Josh.
Blake stepped out of his pick up in a long black dress with a police badge on it, army boots, a Colt 45 and a fake beard.
He found Josh sweeping the floor of the stables.
‘Who the fuck are you?’, Josh said, staring at the large man in the dress.
‘I’m the most interesting man in the world’, Blake said, ‘and I’m here to serve you papers.’
‘Get the fuck out of here.’
‘I think you ought to read this’, Blake said and handed him a piece of paper.
It read ‘Acquisition Notice: you are now my property, I own the police.’
‘It’s all in the paperwork’, Blake said.
He pistol whipped Josh, opening up a deep gash in his forehead. He removed his police badge and stuck it in the wound.
‘You’re mine, now vend motherfucker’, he said, kicking the tip of the badge so it jammed deep into his skull.
‘You might be a useless fucking cop who doesn’t do his paperwork, but I’m going to give you an interesting death.’
He turned him over and stuck his Colt up his ass and blew a hole through him.
‘I’m going to have a bottle of Dos Equis’, Blake said, and headed out into the sunlight.

Richard Godwin is a good friend and great writer.  He was kind enough to loan me this piece.

Author Bio: Richard Godwin is a widely published crime and horror writer, whose work has appeared in many magazines and anthologies, including recently Pulp Ink. Apostle Rising, in which a serial killer is crucifying politicians and recreating the murder scenes of an unsolved case, was his first published novel. It received excellent reviews and is under offer for two foreign rights acquisitions. He has recently Published Mr. Glamour, and is working on the sequel to Apostle Rising. You can find out more about the author at his website: http://www.richardgodwin.net/.  His Chin Wags At The Slaughterhouse are popular interviews he conducts with other writers:http://www.richardgodwin.net/blog.