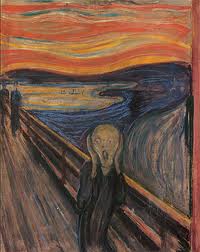 Fear is a killer. When I think back on my life, I am crushed by the things I missed out on because I was afraid. I was a pretty fearless and stupid kid, so that’s saying a lot. But therewere fears. There were girls I should have kissed. There were trips I should have taken. There were things I should have tried…or been brave enough not to try. I missed so many opportunities because I was afraid.
Fear is a natural human response. Telling someone to stop being afraid is kind of like telling them to stop having the hiccups. Although if you hiccup at someone who is scared, it doesn’t cure the fear. So, yes, fear ranks higher than hiccups in the…I don’t know what the hell I’m talking about.
Oh, yes.  Fear. Fear is the writer’s nemesis. I wake up every day, and I punch fear in the testicles because I know it would do the same thing to me if I let it. I’m going to do some generalizing here. You’re going to deal with it because you don’t have a choice. Most of the writers I know…the good ones…are plagued with self-doubt. Maybe not all the time, but enough that it slows them down. They let fear take control.
Writers have a lot to be afraid about. Writing is a very personal thing. And you’re putting your thoughts and feelings out there for people to embrace, laugh at, degrade, and shit on. And it can HURT. Badly. You can tell me you don’t like my shirt. Fine. I didn’t make it. It might annoy me, but I deal. But if you hate my novel (and believe me, there are people who will hate what you write no matter how good it is), I have a much harder time not taking that personally.
We are writers. We pride ourselves on what we create. And if someone craps all over what you created, it is going to hurt. Believe it. You probably already know all about it.  Writers are weird. I can get ten 5 star reviews in a week, and all I think about is the one 4 star review and why the reviewer didn’t “like my novel”.
I am not very vain. You can call me ugly. You can make fun of my baldness. I really don’t care that much. I never claimed to be beautiful. But the words. By God, the words are beautiful. They come from someplace deep inside, and I love them. And when they are devalued, it hurts.
I’m not saying I’m the greatest writer of all time. None of us are. If we were, we wouldn’t be spending our time on Indies Unlimited…we’d be playing croquet with Michael Chabon. Being the best is irrelevant. Because no matter where you fall on the spectrum of greatness, you did the best you could. (Unless you didn’t, in which case you deserve the fear.)
Here’s my point. I think we can all agree Kafka was a pretty talented fellow. He was so afraid that he didn’t want anyone to read what he wrote. He was a writer. Writers are weird. You can do a lot of things to make yourself a better writer, but telling fear to go to hell is right near the top. You will be afraid to push the envelope…what will people say? You will be afraid to share a story you’re not sure about. You will be afraid to let real life into your writing. Or the real you…scars and all. You will have fear dripping out of every pore. Not all the time. But sometimes, sure.
One of the greatest things about being a writer is that you get to do it for a LONG time. Your typing arm isn’t gonna go out on you. You won’t tear your rotator cuff. It doesn’t matter what you look like or smell like. The words matter, that’s it. Give yourself the courage to let your words live. If you don’t do anything else as a writer, do that. Take a chance. When someone offers you an opportunity, take it. If you screw up, learn from it. If someone trashes something you wrote, let them. You have two choices. You can write, fear be damned and be a writer, or you can call yourself a writer and keep making people read that one story that you got a prize for ten years ago.
Fear is your enemy and it breeds in stasis. Do not rest on your laurels or wallow in your defeats. You don’t have time for that. There are more words to be written. Fear doesn’t go away, but you don’t have to listen to it. There are far more important things to listen to. Like that little voice in your head that says, “what if I tried this…would it work?” That is your ‘muse’. And it doesn’t listen to fear unless you allow it to.
THIS ARTICLE FIRST APPEARED ON WWW.INDIESUNLIMITED.COM, WHERE I AM A CONTRIBUTING AUTHOR.
Posted by JD Mader at 2:35 PM 13 comments: 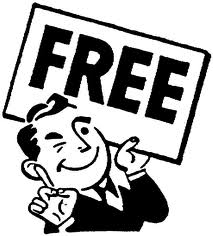 I have decided to try an experiment. I don’t remember the steps of the scientific method – something about a hypotenuse – so, it will be a very qualitative experiment. Here’s the deal. I recently published my second novel,The Biker, on Kindle. My first novel, Joe Café, still sells here and there, but it’s not flying off the shelves. I plan to release The Biker on Smashwords and Createspace, but, for now, I’m happy with leaving Joe Café on Kindle. So, I met at the crossroads with some marketing folk from Amazon and we signed some KDP Select documents in blood.
The weird thing about this is that I think KDP Select is a bad  thing. It makes me Amazon’s bitch. Basically, it means that Joe Café will be free for 90 days, I get to promote it as free for five, and I somehow get a cut of all the books that are loaned out during the three month period. I’m going to be honest with you before this becomes embarrassing for all of us – I don’t quite “get it”. But that’s never stopped me before.
The catch – or one of the catches – is that I can’t publish Joe Café anywhere else during the 90 day period. Cool, I wasn’t planning on it. And, a whole crapload of people can get my novel for free for a few months (I’m gonna have to wait on that yacht I’ve been eyeing). Whatever. Amazon is smarter than all of us. It’s a great idea from their standpoint. For me, well, it seems kind of fascist, but I’m trying to get past that.
When Amazon first started this program, we Indie writers got our sweatpants all in a bind about it. I was one of the ones that thought, ‘screw the man’. I said it quietly of course because I am deathly afraid of Amazon’s hit squad.
So, why the change of mind? It’s quite simple. Joe Café is a good book. I know I’m biased, but quality, intelligent people have read it and said that they liked it. I’ve gotten lots of good reviews (and most of them I didn’t even bug people to write). But it is…how shall I say this…a novel I wrote while trying to conquer a personal issue of grand, crushing, gnawing proportions. It is not a happy book. There is beauty in there, but there is also brutality…a lot of it. The kind of brutality you write when you are sweating profusely and wishing you were dead.
Now, I still have no problem with this. I like dark fiction. I like Cormac McCarthy a LOT. But, something tells me that Joe Café ain’t gonna make me rich (unless of course it gets made into a movie because for some reason welove dark, disturbing MOVIES whereas dark, disturbing books are somehow immoral…you know, like the Bible). Anyway, my new novel is a little more reader friendly. It’s the first in a series. It’s more “marketable”. There’s a love story. So, my hope is that, like cheap heroin, Kindle readers will read Joe Café and come twitching and bitching for more. Then they will buy The Biker in droves, and then I will buy a yacht. Really, I don’t see how this plan can fail.
I feel a little like I’m doing Joe Café dirty…it’s a book I love very much…it deserves better. I feel like I’m making it my two bit crack whore of Indie book marketing. But, what the hell. Yachts don’t buy themselves. So, I have my hypotenuse. Next I will find control groups or focus groups or a Ford Focus or something and make graphs and tell you all how it worked out for me. Cross your fingers. And pick up a copy of Joe Café on the 16th and 17th  (today and tomorrow for you number haters). It’s free. Tell your friends. You can save yourself enough for a few tacos at Taco Bell.
THIS ARTICLE FIRST APPEARED ON WWW.INDIESUNLIMITED.COM, WHERE I AM A CONTRIBUTING AUTHOR. 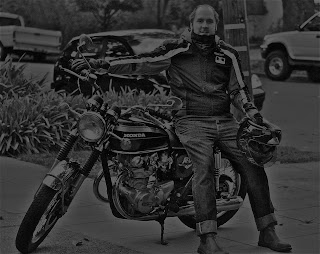 How to promote
a tome that you wrote
a novel, a story
or something quite gory

Simply stand tall
and on top of it all
be a gentle soul, kind
and soon you will find

So how to promote
Whatever you wrote
Remember in school
when you felt the fool
when you had a project
but hadn't a tool
when your legs were tired
and nowhere a stool
then somebody taught you
the things that have brought you
here seeking a truth
so simple, forsooth
do not suffer fools
or bandy your jewels
just simply remember
that one golden rule.
Posted by JD Mader at 12:29 PM 10 comments: