An interview with Richard Godwin. 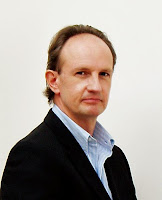 NOTE: Richard Godwin is a good friend and an amazing writer. I basically asked him to do this interview so I could throw him off his insanely prolific path for a second. I don't think it worked. Godwin is a must read for lovers of the horrific served with a side of literary genius.

Fiction is a malleable, play-state of the mind. If we can accept this notion as writers, are we prepared to accept the inevitable capacity for self-devastation this invites? Or is the premise false? How easily do you excuse what your writing demands?

I refuse to accept any premises when it comes to fiction. Novels are so many things, they are genre and hybrid, they are narrative and innovation. If you look at the huge range of novels in literary history, and how similar or dissimilar they are, it shows you quite clearly that literature exists beyond the kind of deductive reasoning so often wrongly applied to writing. How similar or dissimilar are Tristram Shandy and The Godfather? They are both telling a story but in such different ways they throw any attempt at the kind of definition that industries need out of the window. And that may be the problem for publishing. It has made quantitative decisions and assessments of something qualitative. Writing and reading are subjective. Publishing attempts to create a body of profit from a model of understanding that is based on profit while attempting to ensure quality, but it derives its definitions of quality from often internally appointed arbiters of taste in the form of reviewers who habitually fail to understand the books they are reviewing. This is clearly illustrated by the countless examples of classics now established as such by history that were slated by reviewers when they came out. This approach by the industry is ultimately an insult to the public.

I think the second part of your question only applies to someone who has a tenuous grip on their identity and reality. If someone is going to self-destruct they are going to do it anyway regardless of whether they are a writer or a plumber.

I do not accept that you have to write what you know. That is one school of thought but as with many schools of thought its adherents limit understanding. I make things up. I write narratives. Doing so may be an attempt to create order or it may equally be a matter of subverting existing structures. We play with paradigms and with the way we look at the world. There is also the problem of PC patrolling the fringes of writing. It has no place there and never did.

Literature can never serve a political agenda. If you look at the kind of art created by the Third Reich or Stalinist Russia, it was not art; it was merely a manifesto. Writers have always been subversive. No excuses need to be made for it.

I agree with you completely regarding the issue of subjectivity. I also agree that 'write what you know' is the worst advice you could ever give a fiction writer. I've never understood it, but perhaps I am taking it too literally. Obviously, fiction writers don't write what they know all the time. Science fiction would not exist, nor would any of our novels (as I assume you've never killed anyone). I am anti-censorship as well. Can you make a case for selective censorship or do you believe in complete creative freedom? And why? What effect does it have on us as writers and people?

The first thing to say about censorship is that censorship of writing is different to other media. So my answer applies purely to writing. The short answer to your question is no. While there are a few themes I would not touch as a writer nor wish to read about, they are few. I believe if you look at the history of censorship where literature is concerned then we have the ridiculous ban on Lady Chatterley's Lover as an example of how dumb the establishment is when it comes to the arts. Add to that the furor over The Last Exit To Brooklyn, it is salutary to note that the case marked a turning point in British censorship laws.

The things that can be learned from it are that people who do not read have a parochial moral agenda they wish to inflict on others. Hollywood is a good example of censorship. Show as much violence as you want but be careful of sex. That is an interesting concept if you bring social engineering into it. The mentality is let’s make killers and stop everyone fucking because sex is dangerous.

Frank Zappa famously said the campaign that led to the absurd warnings that appeared on CDs in the 80s "was generated by a group of bored Washington housewives." "Who are these select few who have decided what we will or will not listen to?" he said.

And that is a good point. Who judges?  Writers need to be free to explore. If people don't want to read it, then don’t buy it. Then there are the prurient moral crusaders who go looking for things to complain about. They need to be incarcerated with a group of censors.

The notion of the 'harm' that results from exposure to sexual themes v. violent ones has always baffled me. I mean, you can't show sex on TV, but some of the violence and gore is so extreme (I don't watch it. I have a weak stomach for images, not so much for words). How do you think this bizarre stance plays out in society? And what would be the effect if we embraced sexuality and demonized violence?

Wilhelm Reich may have gone a bit barmy but he did stand up to fascism and devised a good working theory based on orgasms. What is wrong with pleasure? Nothing, unless you have a pain principle built into it. And that is at the root for the sex haters - their pain principle is embedded in their sexual drives. If an entire industry encourages violence it is arguable it is in the sweating hands of the war mongers.

Generalizations are dangerous, but let's make some. Are writer's narcissists?  Do you feel that there is an element of narcissism in all creative ventures?

I will resist the generalization. There is an inherent danger of narcissism in writing but not necessarily more so than in many fields. Narcissism is a prevalent modern condition. Interestingly, in the middle ages, authors did not put their names next to their works. The Pearl poet is anonymous, we do not know who wrote Njal’s Saga. The concept of writing was different then. And I think that shows that consciousness has changed. It does not apply simply to writing. I think it depends on the writer. Is there narcissism in writers? Yes, but not more so than in an actor or a politician or many other areas.

How would you feel about publishing anonymously? Is recognition an important piece? I find that many writers claim it isn't, but not too many publish anonymously.

I am not sure my publisher would like that. Recognition is important to people in many ways but I do not think it is the same thing as narcissism.

Certainly, your publisher would not like it. How, then, do you feel that the desire for recognition differs from narcissism?

Recognition is the identification of something previously known or understood. Narcissism is an extreme and pathological form of vanity based on an addictive need for constant self-gratification to the point where people become your mirror.

I have painted an extensive portrait of narcissism in my novel Mr. Glamour. The beautiful wealthy people in it only see themselves in each other. They are incapable of appreciating that anyone else exists. But the killer changes that.

How do you think your writing would be different if you had been born and raised in the US? Or would it?

I don't think it would make any difference at all.
See: Piquant: Tales Of The Mustard Man.

You are extremely prolific. I know this is the most boring question to be asked in an interview, but I have to know...what is your writing schedule like?

I write every day.

Your characters are real and flawed. Your stories bleed. There is a delicacy to your prose that makes the darkness...deeper. How important is this juxtaposition in conveying your stories?

Juxtaposition is everywhere. Stylistically I think it conveys the ambiguity of the situations I am writing about, and it engages the reader.

The literary world is changing. E-books and self publishing are big game changers. It seems that people are reading more than they used to...perhaps that is wishful thinking. How do you envision the future of literature and publishing?

I think in many ways people are reading less because they want shorter forms. I think the big publishers are struggling to contain the situation largely created by Amazon. They have been dragged before the US Supreme Court for price fixing and rightly so. I think it is going to become extremely interesting.

Apostle Rising provides an interesting commentary on religion and its hypocrisies. What role will religion play on a global level in the centuries to come? Will we (the collective we) shed the trappings of our mythologies or become more didactic in defending them?

Religion will need to use alternative mythologies to stay abreast of the technological revolution.

Identity is being subverted.

Art is the only thing that can reverse that.

I refer you to The Mustard Man.

Thank you, Richard, for the opportunity to pick your brain. If you are not yet a fan of Godwin’s work, I highly recommend you rectify that unfortunate happenstance.

Richard Godwin is the author of crime novels Mr. Glamour and Apostle Rising and is a widely published crime and horror writer. Mr. Glamour is his second novel and was published in paperback in April 2012 by Black Jackal Books. It is available online at Amazon and at all good retailers. Mr.Glamour is Hannibal Lecter in Gucci. The novel is about a glamorous world obsessed with designer labels with a predator in its midst and has received great reviews.  Apostle Rising, in which a serial killer crucifies politicians, is available everywhere books are sold. It is also available for the first time as an E-Book with some juicy extras, an excerpt from Mr. Glamour and four deliciously dark Noir stories, like the finest handmade chocolate.

He is an active member of the CWA and HWA.