I am a value meal. 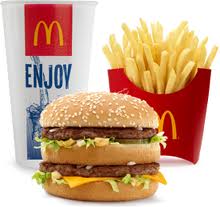 I don't eat fast food unless I have to, but a lot of people do. No judgment, I believe in free will. I'm more of a burrito truck kind of guy, myself. Actually, I eat a lot of bananas. Cheap, those delightful yellow tubes. But this is not about burritos or bananas. This is about a question that I face on a daily basis. A question many of my fellow writers face on a daily basis. Am I or what I create worth less than a value meal?! Seriously?

OK, so here's the deal. I write several short stories and usually an article or two a week. I don't get paid for any of it. What I DO get paid for is the novels I write. And occasionally, my collection of short stories gets snapped up. I'm always a little afraid when it does. It's like seeing a snake in your living room. Cool, but disconcerting.

Sorry. Value meal. So, I haven't been in a while, but I'm guessing that a meal (of processed, disgusting "food") from the value menu runs you around $5, depending on whether you want to 'supersize', or 'go large', or 'contract diabetes', or basically take advantage of any of the value meal options. I watch people with their bags from McDonalds, Taco Bell, Burger King, whatever walk by my window all day long. While I eat a banana and a piece of turkey plain. Because I like my organs. But also because that is what I can afford. Which brings us to the point. Despite the optimism of the title, I am worth less than a value meal.

All my novels are $3.99. I don't pressure anyone to "supersize it" (although I could add those ten thousand words I axed back in if you want). This is not a guilt trip. It is, hopefully, a realization for those who enjoy reading and the idea of literature as an art form.

My books are good. I'm no Michael Chabon, but I can hold my own. That's bragging if you want to see it that way. I don't. It takes me about eight months to write a novel. It costs money to have it edited. It costs money to have it formatted. I read the thing at least 50 times, myself. When I am done with the eight months of bliss, misery, happiness, and insane frustration that writing a novel entails, I have a product. A product that costs less than the processed "foods" many people eat every day. Hell, my novels would be the cheapest things on most value menus.

Now, you might be thinking that I'll bitch about how more people should buy my books and blah, blah, blah. I'm not going to do that. I simply want you to think that there are TONS of great authors whose work can be had for the price of a latte, a value meal, a six pack, a bottle of wine, a pack of smokes, and on and on.

It is an interesting time to be a writer and a hard time not to be a bitter writer. People go to movies they know they are not going to like for the price it would take to pick up a few independently published books. People go to the movies every weekend. I know a lot of "our generation's" finest writers who can barely pay their rent. This says something about all of us. Something that should make learned people sad.

Here is a good example of what I mean. I wrote a piece in a collaboration called "Seasons" with my friends (all excellent writers) David Antrobus, Edward Lorn, and Jo-Anne Teal. It is a tale told in four short stories. It's a pretty dope piece of work. We priced it at 99 cents and decided to donate the proceeds to suicide prevention. We've sold enough copies to buy the suicide prevention folks lunch - maybe, as long as they don't get all uppity and order off the value menu. But here's the messed up part. On my fiction blog, www.jdmader.com, my contribution to "Seasons" is my "most read post". Same with Antrobus last time I checked. In the last three months, it has been read 895 times. That's a chunk of change that could be doing some good.

See, before we published it, we wrote the pieces on our individual blogs. So, a thousand-ish people have gone to each or our blogs to read the rough draft/original pieces instead of contributing 99 cents to a good cause. THAT blows my mind. Not on an ego level. On a human decency level.

But let's get back to the value meal. My books are all priced at $3.99. I think that's pretty darn fair. But other people don't. People who will spend $5 on sandwich that is consumed and forgotten  in 15 minutes blanche at spending $4 on a book. Not just my book. Lots of people's books. This ain't just about me.

There are not as many people who like to read as there are people who like to eat cheeseburgers. I get that. But this is a disturbing trend when it comes to e-books. People want them. But they want them for free. Or for a dollar. Someone has to write em, though. And they'll probably write better (and MORE) if they aren't delirious from hunger or worried about paying the health insurance bill.

Again, this is not intended to be a guilt trip. I took a walk with my girls the other day and there were a bunch of kids selling lemonade for $1 a cup. They probably made more in that day then I make in a week. So, no guilt trip - I swear, I just want to put it out there. What we need to think about is "value for money". A book is something you can escape into. The entertainment can last for days, even weeks - a lifetime - depending on the book and the type of reader. Why should readers expect to spend less than five bucks for something that took almost a year of blood, sweat and tears to create?

Now, maybe this is just the death of "literature" as we know it. And that's fine. Things change. Traditionally published writers are bummed because indie writers undersell them, but we set our own prices. And we set them cheap. Because, fair or not, we are on the value menu.

Now, BIG STRETCH, think back, if you're old enough, to what eating a burger, fries, and a shake meant before value menus existed. Did we pay a little more? Maybe. Did it take longer? Hell yeah. Was the food better? You bet your ass.

If you have read this far, you probably care about the state of reading and writing. I do. And it's not looking good for a lot of people (and I'm not sure people connect the dots). I think eventually we'll punch through to the other side, but it will take a while. All revolutions take a long time and leave many casualties. This one won't be any different. I don't know what to do about it except to keep on writing. And try to sell a few books now and again. That's all any writer, "value meal" or not, can do. In the mean time, readers are getting a heck of a deal. No side of fries, though. But zero calories unless you know something about the Kindle I don't know.

If you feel like checking out any of the authors above, all you have to to is click. If you want to see my books: CLICK HERE.
Posted by JD Mader at 1:54 PM