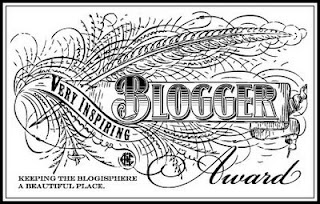 Well, I like pretty much everything about R.J Keith. I like his blog. He's friendly. To the best of my knowledge he doesn't sell meth to preschoolers or kick puppies. To the best of my knowledge. He was also kind enough to nominate me for the Very Inspiring Blogger award and, considering it just took me like ten tries to spell 'inspiring' right (fuck you spell checker...I'll get it eventually), well, I think he might be a little off his nut, but so be it. About the only thing I don't like about R.J. Keith is those damn periods. But he's probably smarter than me. Because I like JD Mader without the periods, but people always add them in there which is my own dang fault, but still makes me want to kick puppies and sell meth to preschoolers. So, basically, if I get arrested for selling meth or kicking puppies, you have no one to blame but R.J. Keith, society, my parents, my teachers, my little league coach, and possibly me (a tiny bit). But mostly R.J.

Seriously, though, these awards are interesting. They are pretty much chain letters, but they are nice chain letters. I'll put the sarcasm aside for a second and say that I truly am honored that R.J. would think to include my blog. And I'm stoked to see a lot of other good bloggers on there, too (which will make it much harder to come up with my list of fifteen...I don't think there is a rule against duplicates, though). Which brings us to how this works. I link back to R.J.'s blog. Done. I tell seven things about myself. Will do. And then I nominate 15 other bloggers. Will do that, too.

Without further ado, here are seven actually true facts about me.

1)  I really prefer even numbers to odd, so this 7 thing is kind of wigging me out a little.
2)  When I was in fourth grade (new in school), a boy I didn't know walked up and kicked me squarely in the nuts. I have spent the last thirty years trying to figure out why this happened. At the time, I just spent three hours on the floor in the fetal position.
3) I collect knives. To a frighteningly obsessive extent. I'm into old, vintage USA made knives, so we're not talking combat knives or anything, but still. We're talking hundreds.
4) I am extremely poor, so you might want to head over to Amazon and buy a few books. It's the classy panhandling.
5) A woman just walked by my apartment, and I had impure thoughts about her nether regions.
6) Along with being obsessed with knives, I am obsessed with birds. I have the whole David Attenborough 'Birds' series on VHS (no, I don't have a VCR). When I was a kid, I only wanted bird books for presents. There is a lot of psychological shit going on here. Let's move on.
7) I have a very odd mole (yes, Mom, I've had it checked). I call it my secret mole. Let's just say you'd have to look VERY hard to find it.

Now, my nominees for the best blogs.

And that's it. I'm going to go huff gas now like I SHOULD have been doing for the last hour instead of being all gracious and shit.