'I told you so.' by Yvonne Hertzberger 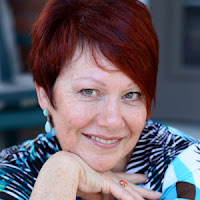 Another friend (and another outstanding writer) grabs the mic today. Give it up for Yvonne Hertzberger, everyone. Enjoy the story and check out her books. (Thanks for classing up the joint, Yvonne!)

“I told you so.” She could hear them say it now; smug, grim, condescending smiles on their faces. And they had. That was why she had never been able to go to them, to ask for help. Now she pressed her back into the cramped crawlspace under the family room floor, in the dark. She barely fit her body around the pipes leading to the second powder room.

The family room had been added after the fact, so it had no basement. She knew he couldn’t be bothered to come and drag her out. He didn’t need to. She’d have to extract herself at some point. He’d gloated about it aloud from the top of the stair, enjoying taunting her.

She shivered in the dank cold and placed protective hands over her distended belly. Would she make it 'til morning? If she left her hole now she doubted he would leave her alive this time. How had she come to this? A cramp seized her, making her hitch her breath. Be still, baby. Hold on. Just 'til morning.

A drip fell on her knee from the ceiling. How could that be?  There was nothing wet there.  Oh, yeah, that’s what it was. Piss. He had pissed on the mat over her head. The walls, too, laughing, “Now, clean it up, whore.” She’d never been unfaithful. He knew that.

This was the first time she had directly disobeyed him, refused to submit to his favourite ‘punishment’.  She’d done it for the baby. It would kill the baby. She shuddered as she replayed the scene.

“Stand up whore. Spread your legs.” He stood there, arms akimbo, feet set firmly apart, waiting – waiting to kick her there. She’d almost obeyed. He usually let her be after that. But the baby had kicked. So she’d turned and run. He had managed a flying kick at her belly as she ducked away from his grab for her hair. She’d made it as far as the stairs, to this hole, just out of reach under the stair - unless he put in some effort – effort she wasn’t worth.

Another cramp assailed her. Not now, baby, Wait. Wait 'til morning. Wait. Could she hold on?

“How long do you think you can stay there bitch?” Then he changed his tone, laughing as he sang, “Come out, come out wherever you are...”

She almost cried out as another contraction hit her hard, biting her knuckle to hold back the sound. It might be enough to make him come down after her. She thought about what had triggered him this time. Oh, yeah. Supper. He’d come home late and the chicken had dried out. He’d thrown the searing thing at her, hitting her across her neck. She could feel the burn, now that she remembered. Good thing it hadn’t been the beans. They were sitting in scalding water.

When another hard cramp called her attention to the trickle of dampness that went past her panties and onto the floor underneath her, she could deny it no longer. Likely caused by that kick to her belly.  Labour. Four weeks early. Not now. Not yet. Oh, baby, hold on. Just 'til morning.

Morning.  If she could make it 'til then. He’d go to work. He never missed work. He always left, confident that she would be waiting for him when he returned, supper cooked, pretending nothing had happened. He knew she didn’t have anywhere to go; didn’t have the guts to leave him either. It was why he had bought the old farmhouse, far from anywhere.

They had soon lost contact with her parents. Who had given up first? Them? Had she? Had they ever really loved her? Or only when she was their good little girl? Did they have any idea how she lived, now? Would they care? A lone tear slipped down one cheek.

Another contraction, stronger than the last brought her back to the present. How long had her reverie taken? Things were quiet upstairs. Had he gone to bed, secure in the belief that she would have his breakfast ready when he woke? How had she missed hearing that? She tried to stretch into a better position. It only caused her to scrape the skin off her left shoulder.

She listened - and listened. Nothing.  Another contraction. No time to lose. She had to act now or they’d both be dead. Hold on baby. Biting her lip against the pain of extracting herself from her hole, she eased first one, then the other leg out in front of herself and waited for the pins and needles to stop as circulation returned. She crabbed on her rear, feet first, across the small space to the stairs. Holding her breath, praying there would be no noise, she pressed one foot against the door to open it. Good. It hadn’t latched. She listened. Nothing.  Light still seeped out from the living room. Not gone to bed then. Now what? Was he waiting, watching? Panic almost sent her scuttling back into her hiding place. A movement in her taut belly stopped her.

She eased out further. No sound. Was he asleep in the chair? She levered herself onto hands and knees. Silence. She crawled into the kitchen and reached one hand up to the counter, grabbing hold of it to heave herself to standing. Another contraction made her double over, but she managed to keep one hand on the counter top so she didn’t fall. That’s when she realized where she was. In the drawer below her hand - the knives.  No, she could never do that. Another contraction.  The baby. She had to, for the baby’s sake. Slowly, ever so slowly, she eased the drawer open.  When no sound came from the living room, she let out the breath she had been holding. There it was. The carving knife, the long curved one, the sharpest one. In her hand. How had it got there? She didn’t remember picking it up. She slid one foot in front of the other. She needed to see where he was. She didn’t want to kill him. Only to get away. If he was asleep she had a chance. He was a sound sleeper. It took a lot to wake him.

She peeked around the door. Yes, there he was. A light snore emanated from his throat. His head lolled back into the corner of the wing of his favourite chair, the green one.  Maybe she could sneak out.

A gasp of pain escaped her when the next contraction hit. She froze in panic. Had he heard?

His eyes opened. He regarded her with a laconic, lazy smile. “Now, you don’t want that thing,” he drawled. He rose out of the chair, lithe and alert, like a cat on the prowl. His tone changed to a snarl and he lunged for her - for the knife. “Give me that.”

She jabbed as hard as she could.

A slow look of surprised crept over his face. His hands went to his stomach where blood oozed around the handle of the knife.

He tried to follow but stumbled and fell in the doorway to the kitchen.

So much blood. She had never seen so much blood. He made it to the counter and gripped it with a slippery, bloody hand. She watched him slide to the floor, a pool of blood spreading under him.

Did I do that? She tried to remember. Had she stabbed him? Had she? Her mind went blank. Another contraction brought her back. She looked at her husband. He lay unmoving, pale. Was he breathing?  She waited, watched. No movement, no rise and fall of his chest. Dead then. My god, what had she done?

The phone. She needed an ambulance.  He had grabbed it and knocked it to the floor when he fell. She sidled over to it and managed to dial 911. “Which emergency service do you require?”

“Help me,” she sobbed, “please help me.” The phone, slick with blood, slipped from her grasp. Before she could retrieve it the next contraction cut her short. This one doubled her over and she had to sink to the floor.  The next one came right on top of the last, making her cry out.  She put her hands on her belly. No. Not yet. Wait. We’re almost there. Wait. She forced herself to her knees and began to crawl to the door. Not knowing why, she lifted her skirt to check between her legs. The head. The head was there. Too late.

She rolled onto her back just before the next contraction. The rest of the baby slipped out. She heard a cry. I’m here, baby. Mama’s here. She gathered the last of her strength, reached  down to lift the wet little body onto her stomach and cradled her hands around it.

That’s how they found her, a drying pool of blood around the placenta on the floor between her thighs.

The female ambulance attendant took the baby from her lifeless hands and, ascertaining that he was alive and appeared well, quickly cut the cord and wrapped him in a heated blanket. That done, she knelt down beside the still cooling body, the baby in the crook of one arm. She studied the ashen face of the dead mother, then reached out one hand and stroked the hair back from her forehead. “It’s a boy,” she whispered. “He’s going to be fine.”

Yvonne Hertzberger is a native of the Netherlands who immigrated to Canada in 1950. She is married with two grown children, (one married) and resides quietly in Stratford, Ontario with her spouse, Mark in a 130 year old, tiny, brick cottage, where she plans to live out her retirement. She calls herself a jill-of-all-trades and a late bloomer. Her many past paid jobs included banking, day care, residential care for challenged children, hairdressing (her favourite) retail, and customer service. She enjoys gardening, singing, the theatre, decorating and socializing with friends and family.

Hertzberger is an alumna of The University of Waterloo, first with a B.A. in psychology, then and Hon. B.A. Sociology and stopped ½ a thesis short of an M.A. in Sociology. She has always been an avid student of human behaviour. This is what gives her the insights she uses to develop the characters in her writing.

Hertzberger came to writing late in life, hence the label ‘late bloomer’.  Her first Fantasy novel “Back From Chaos: Book One of Earth’s Pendulum” was published in 2009. The second volume in the planned trilogy “Through Kestrel’s Eyes” is available currently and the third book in the trilogy “The Dreamt Child” is pending.