Full Disclosure: Laura is a friend of mine. And a great writer. Hence, she gets to be on my blog. Ta DA! 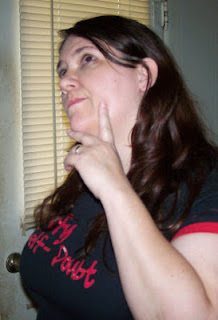 What's the best song ever written (no copping out, pick one)?

“Best song” can mean a lot of things – technical greatness, sales power, etc.  But for me, the best sorts of songs are those that touch something inside of you, that wrap around your heart or mind or soul and leave you changed.  There are a lot of amazing songs out in the universe that have that power, but if I have to pick one, it’s going to be Lynyrd Skynyrd’s “Simple Man.”

JD, here. That is a seriously random choice. I like it. I would have gone with something by Justin Bieber.

You love music and writing, why?

You know, I think the main character from my Jukebox Heroes series, Elizabeth Morgan, explained the music thing pretty well:
“For some people, music is just noise, pleasant sound to fill up the silence or drown out what they don't want to hear. To me, it's much more than that. Music can energize me, soothe me, motivate me. Make me laugh, make me cry, make me see things in a new way. It can make me think or quiet my mind.”

So basically, I love writing and music because they allow me to connect with people, to know that others have felt and thought the same as I do, and to let others know that they are not alone in their thoughts and feelings.

As for writing about music...that’s a whole different animal.  Originally, I had this idea that I wanted to present musicians as ‘regular people’ because folks have a tendency to treat them like zoo animals.  Musicians are often adored in spite of who they are, or at least with a disregard of who they are.  They are also often despised for ‘having it made’ (the Money for Nothing myth).  So instead of playing into the mythos and the glamor and all that jazz, I make a point of pointing out the ups and downs, the good and the bad of both the musicians in my stories and of the lives they lead.

That's important, I think. A lot of people don't realize that there are many successful musicians that work tirelessly and carry their own equipment.

What makes you happy enough to drink in celebration?

Not that I’m much of a drinker, really, but I’d have to say it’s those moments when someone sends me a message on Facebook or writes a short review on Goodreads or Amazon to let me know how much they were moved by something I wrote.  I might actually, really, honestly drink in celebration if I actually graduate in May.

You'll graduate. Then, I suggest some kind of fancy mixed drink. Like 'Thunderbird' and Sprite.

What makes you angry enough to consider injecting alcohol straight into your vein?

Dealing with my university.  Also, being treated like I am stupid or inferior.  Bitch, please.

I know people can be annoying, but injecting alcohol is crazytown. I can't believe you even suggested that.

The pitchfork is metaphorical, G. Really, I'd like to cuddle quietly with Chabon while he reads 'Where the Red Fern Grows' to me. And then we cry...the crying gets desperate...almost breathless...let's move on...

Do you think Indie writers will win the war of juvenile bullshit (WOJB)?

You know, I really do think we will.  And you know why?  Because we’re tenacious.  As indies, we have to be.  We have to have that rare and precious ability to just hold on to our dreams and keep plugging away, and that same bullheadedness will see us victorious in the WOJB.

We will attack in Red and Black!

What is the weirdest thing anyone has ever said to you?

People have said a lot of weird things to me.  I’ve had drunk people call me at work and say some really random shit.  But the things that strike me as really weird are those things that are so unexpected they take my breath away.  To that end, I’ve have to say the weirdest thing was said to me last April.  I had posted on my Facebook wall on what would have been my dad’s 80th birthday, and my buddy Ryan – who I barely knew at all then and have never even spoken to – told me my dad would be proud of me and that I had the kind of courage that any parent would be proud of.  I’d never seen myself as particularly courageous, but the bigger part of what made that ‘weird’ was that my dad was always, always telling me he was proud of me, even though most of the time I had no idea what there was to be proud of.

You live in Texas. Why? In the name of God, why?

I was born in Texas.  My family and some of my friends are in Texas.  And um...I haven’t made it out yet.  Though I have to say that Galveston isn’t really like the rest of Texas, and it’s been pretty awesome living here.

Dallas frightened me. I don't want to talk about it.

If you had to punch David Antrobus in the face or kill a kitten, which would you do?

I couldn’t kill a kitten, and Antrobus wouldn’t want me to.  Besides, I hit like a girl.  I’d totally go with punching Antrobus in the face.

He would totally WANT to be punched in the face, too. (And he TAKES a hit like a girl).

What makes you want to write?

I’ve loved writing stories as far back as I can remember.  A lot of that was inspired by my teachers, who gave us writing assignments and made a point of reading aloud or posting the best ones, my mom, who instilled in me a love of reading, and my older brothers, who were always writing stories and poems and parody songs.

Honestly, though, the thing that got me writing and sharing my work was fanfiction.  I read a lot of fan fiction in a particular fandom (Harry Potter, if you must know), and some of it was brilliant.  Some of it was crap, though, and I knew I could do better.  So I did.

Many years later, I learned that indie writers could self-publish, and so I decided to give it a try.  People liked it.  Some people loved it.  And that love, that connection, gives me a whole new reason to want to write.

Mainly, though, I have to get the stuff that’s in my head out somehow.  When I don’t write enough, my brain gets cluttered, and I turn into Ms. Cranky McCrankypants.  It’s not pretty.

I can so relate to that. Only I call myself 'Sire" or Admiral McCrankypants. But never late for dinner.

You get to vaporize three people...who are they?

See, if I was going to vaporize people, I’d probably want a time-machine first (goodbye Adolf Hitler, Osama bin Laden, and Stephenie Meyer), but without the time machine, it gets a little tougher.  I’d probably pick a state-level politician, a celebritard, and some assholish foreign dictator.  Or maybe some of the dipshits in the media (don’t get me started!).  Or maybe the next three people who cut me off in traffic.

LB Clark currently resides on Galveston Island, where she spends as much time writing as possible (when she's not being distracted by her roommates, her friends, her day job, books, or random shiny objects). She has loved both writing and music from an early age, so combining the two seemed like the thing to do. In addition to her stories in Music Speaks, LB has published three books in the same series.

When she's not busy with writing or work, LB's favorite pastimes include travel and music. Much like writing and music, she has often combined her love of music with travel, usually with her best friend and co-conspirator, Erin McGowan, by her side. The two have visited a wide array of places in order to attend concerts, including Natchitoches, Louisiana; Nashville; Orlando; and Albuquerque. The most interesting and insane adventure they undertook for the sake of music, however, was a road trip from Texas to California in the summer of 2011.

LB dreams of one day being able to combine her three big loves - travel, music, and writing- into a career. In the meantime, she'll just keep weaving her travels and love of music into her writing.

Check the books out: Amazon Page!