I don't know Edan Aldridge. He shares a passion for pocketknives that means we end up on the same forum sometimes. A piece Edan wrote struck me, and I asked him if he would like to publish something on my blog. He promptly produced this awesomeness. Oh, and Edan is 16. 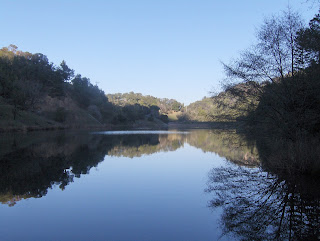 The sky looked like death that day, not that it mattered much to him. He kept his eyes on the mottled gravel below his feet as he followed the meandering path down the river. The gazebos and seesaws of the WPA park that had stood there had long ago gone to seed, and the rough-hewn track that lay nestled on the bank was all the remained. He walked it slow and steady, knowing where it began, and where it ended, and what would be there to greet him.
On occasion, the long way gave him solace, but today the river path gave him no comfort. That morning he'd woken up to the same aches and bruises, as well as some new ones that had appeared after the previous night's altercation, if you could call it that. The man had made good on his drunken threat yet again and, as the boy had come to learn, there would be more to come when he got home. The home in question was a tired, cramped mill house bolted to a sparsely wooded hillside on the fringe of town. The view from the small, listing porch was disheartening at best. Off to the right, the wide, green river with it's ponderous barges and soot spewing mills wound out of sight among the hills. On the opposite bank, the sharp rim of West Virginia jutted high into the gunmetal sky. To the left of the house, the oppressed downtown clung to the flattest land that the Ohio valley had to offer and extended slightly up into the hills away from the river.  It was a dark place. He ran these scenes through his head as he walked, and managed to stay preoccupied with them until he scaled the hill and found himself standing before his blue, weathered door. He looked into the narrow front window, braced himself, and stepped into the house.

He'd never quite gotten used to the smell. It assailed him as he shut the door. The stench of cheap cigarettes, mildew, and one hopeless, worthless old man. He felt it settle on his clothes and in his hair. God, he hated that house. When he first entered, the air was still and dank, but the silence was soon fractured by the man (as long as he could remember, he'd been "the man", never much of a father) lurching up from his chair and swaggering toward the boy. Long years of practice had told him what was coming, and he ducked the initial blow. The man let go an inhuman growl, and took another swing. By then, however, the boy had run down the hall and was in his room, door shut and the homemade barricade set tightly in its slots in the door frame. He huddled on the bed, listening to the wind buffeting the outer walls, and the man battering the door with his huge fists. Eventually the barrage ceased, and the room was silent.

The young man sat pensively on the bank, examining the pistol. It was a week later, and he had two less teeth, and had decided he'd had enough. The new cut on his cheekbone had begun to heal, but his right eye was still black and both were bloodshot. It had been days since he'd had any real sleep, and he hadn't been back to the house on the hill in almost a week. After the last onslaught, instead of running to the safety of his room, he'd gone to the man's small dresser and retrieved the pistol. It was a Smith and Wesson Detective Special. The barrel was scratched and rusted in places, but the original bluing was intact in spots, the checking on the walnut grip was worn almost smooth. He palmed it, along with a small box of .38 cartridges, and ran out the door. He'd been sleeping on the path by the bridge since then, slowly eating down the $5 in his pocket and biding his time. He wanted the man to be sober for this.

The 9th dawn after his exodus was a long time coming. When it did come, he hopped on the road at the end of the bridge and followed it into town. He went past the hardware store and into the small diner next door, spending his last quarter on a cup of coffee. He drank meditatively, and, when he finished, he got up slowly and headed back to the house on the hill. He loaded the pistol carefully as he walked. Soon, he knew, there would be no more little, weathered house with its murky windows, no more endless showers to relieve himself of the stinking smoke and sweat, and no more man. At this thought, he quickened his step. Soon, he told himself. Soon.

He stood on the porch for what felt like a century. The pistol hung loosely in his right hand, hammer back, waiting. He should be up soon. And then he heard him. A faint rustling in the front room, a muffled curse, then the sound of him banging around in the small kitchen in the rear of the house. Enjoy your last meal, old man. Then the slow, steady steps. Coming from the back, growing louder and closer till they were just to the other side of the door. Then it opened, and the young man fired.

The first blast knocked the old man back into the living room. The shot had been carefully aimed, and hit him  just over his left knee. He staggered back and fell against the small couch that squatted by the foot of the stairs. The second shot hit him square in the stomach, and the next two shots hit a few inches higher and to the left. The last one caught him three inches above the right eye, and, just like that, it was all over. The young man looked at him for a moment, then rolled the body over and grabbed the wallet out of his back pocket. He went back into the kitchen, grabbed the keys and the coffee can from under the sink, and walked out of the house for the last time. The sage green Plymouth Duster cranked after the fourth try, and he rolled down the hill and toward the river. When he reached the bottom, he wound his way down the road leading toward the river, and crossed into West Virginia. The car ascended the switchbacks laboriously, until he was finally at the top of the bluff. The road kept to the edge, a thousand feet above the river. Eventually, he came to a stop, and left the car on the side of the road. He went to the edge and looked across the river into town. Only then did he look down at his hands. He had always been pale, and this made the blood look particularly fresh and nauseating as it slowly dried on his palms and under his fingernails. He wiped them on his jeans, and looked across the water again. He could see his street through the trees, and he watched as two black and white Fairlanes with bubble lights climbed toward the summit. It was then that it occurred to him that he was on borrowed time, but this didn't detract from the flood of relief. The man could never touch him again and, at least for now, he was free.

Edan Aldridge lives in the suburbs of Charlotte, North Carolina and began writing and drawing comics at a very young age. An overwhelmingly negative response to his initial work led to a transition into songwriting. He soon tired of this as well and has been honing his craft as a writer for the past five years. He also likes to call himself a photographer, and operates the blog, "Moveable Feast." He hates cats.
Posted by JD Mader at 1:55 PM