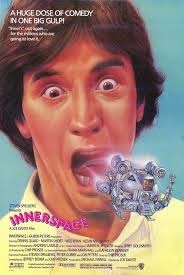 My excellent friend Yvonne Hertzberger (also a brilliant writer) invited me to do this 'blog tour' thing. Naturally, I assumed it was a cheap come on and informed her that I am a happily married man. Then, I thought she was talking about climbing inside the internet. Then, I thought about the movie 'Innerspace'. Then, I thought, “that was a rad movie, I should watch it!” Then, I remembered I had to answer these questions (Thanks Yvonne!!!) So, I’m answering these questions, and then I’m passing the mic to some awesome writer type folks. Then, I’m going to eat lunch. And I might watch 'Innerspace'. Oh no he didn’t! Oh, yes, yes, I did. Martin Short, baby! (I haven’t forgotten, amigo.)

Yvonne is awesome, check her out. Here’s her post: KAPOW! - and now we rock the roll. Take a shot of whiskey and slap your dog, 'cause these questions are so pointed you might end up blind.

What am I working on?

I work on multiple projects at the same time. I didn’t do this until I started writing longer fiction. I need a break from novels … they’re long, you know? When I used to write stories exclusively, I generally worked on one until it was done. I wrote some songs during the process, but that’s much different - I'm always writing some shitty song.

Now, when I’m working on a novel, I need to write short pieces. I write a lot of flash on my blog. I still write music. So, the answer is a bit ambiguous. I’m WORKING on the third installment of the Matt Stark series (which will focus on Jo). I’m also writing stories. Some articles. I might even write a song or two. A play? I won’t write a play. I can almost guarantee it. (Unless there's money involved, in which case I will write a play about anything you want. Anything...)

How does my work differ from other of its genre?

This assumes a few things that I am uncomfortable with. I don’t think in terms of genre unless the book is REALLY formulaic. Generally, I consider good books to be good books that may be romantic, adventurous, murder-y, sad, memoir-esque … you get the idea.

But lots of other people think genre is important, and I guess my longer work is mostly “crime fiction” or some nonsense. My feeling is, if the characters are good, the genre is life. Still sounds pretentious. Ironically, I feel it is just the opposite. Let the readers apply 'genre' stickers!

Why do I write what I do?

How does your writing process work?

I either come up with an idea, start writing it in my head, and then eventually get it down on paper or I just sit down and see what comes out. Usually, the latter. Novels involve more puzzling out, but most of my short stories come from just sitting down and deciding to write a short story. I am a pantser for sure. I don’t think I’d enjoy writing nearly as much if I knew where the journey was headed.

Here’s those awesome writer types I mentioned. They will be answering the above Q’s via their blogs, graffiti, scrawled notes or in any other way they choose on the 7th. Or they won’t. And we will forgive them because we love them.

Jo-Anne began writing fiction about three years ago.  She is particularly interested in telling stories of the hidden, the hurt, the silent and the unheard.  Concentrating on flash fiction as she began to develop her writing voice, she now writes short stories and is planning her first novel.

Jo-Anne lives in Vancouver, British Columbia where she happily pursues the writerly stereotype of spending too much time in coffeeshops.

Ed Drury is a multi-instrumentalist, composer, teacher, instrument maker and author. He combines his experience with classical music and his love for traditional music forms by composing music inspired by his world travels.

Ed lives in Portland Oregon where he teaches, performs, writes and records. He has written and published five books. Two non-fiction books on music and a trilogy of science/eco/fantasy books called the Whale Whisperers Saga.

Teresa Kennedy is the Editor in Chief of Village Green Press, LLC and the author of more than 30 published books. She has won a Southwest authors award, and the French Pen Faulkner award for her novel, Baby Todd and The Rattlesnake Stradivarius.

Big thanks to Apples for being affordable and nutritious. And for making this blog tour possible.